Code signing certificates are amazing! In this digital world, cybercriminals always try to harm users and publishers by their fraudulent activities. The hackers can easily upload tampered codes, apps, or other executable files on the web.

help protect the users from using altered codes. They also assist the developers to keep their programs safe.
Whenever a company or an individual programmer makes an app or code, they use code signing certificates to keep it secure from attackers. In this guide, we will walk you through each and everything about code signing certificates so that you don’t have any doubts about them in the future.

What is a Code Signing Certificate?

A code signing certificate is used by the developers to sign their code, apps, or other executable files. This certificate assures the users that they are using legitimate software.

Without a code signing certificate, there is a huge chance of the code being tampered with by cyber-terrorists. Also, when users download any software, they receive the “Unknown Publisher” warning if it is not signed. Whereas, the system does not show such warning if the code is signed by the author.

These certificates increase the trust of the users on the software by validating that it is not altered or tampered with after its release. When the developers need to upgrade the existing code or app, they have to use the same key that was used to sign the source file. In this way, you can trust the upgrade as it can only be signed by the developers (because they possess the private key). 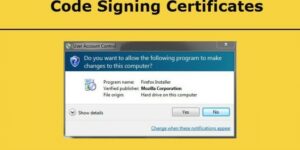 Once a new code or any upgrade is signed by the author, it can be used and implemented safely. If someone alters that program, it no longer remains secure for usage. Users and developers can see the clear warning on the system and can protect themselves from such scams. Let’s move ahead to know the working of code signing certificates.

How Does a Code Signing Certificate Work? Here is the series of events that occur at the publisher’s end:

Let’s find out what happens at the user’s end:

A code signing certificate has two kinds as follows:

A standard code signing certificate is issued by the CA after validating the business. The CA confirms the identity of the publisher, firm name, location, and phone number. After validating these things, the CA issues the certificate to the organization. The private key can securely be stored on the server.

An EV code signing certificate involves an extended validation process. The certification authority checks the authenticity of the developer, business location, phone number, attestation form by the government, and many other details.

The private key, in this case, is kept secured in a Hardware Security Module. This certificate makes it impossible for the hackers to get their hands on the private key by comprising the network as it is stored offline.

Advantages of a Code Signing Certificate

A code signing certificate removes the risk of the code being altered by hackers. As a consequence, the company’s data remains safe from cybercriminals, and its image will be improved in the sights of users.

The users will confidently buy the software from a well-known firm and hence, the company’s overall sales will increase significantly.

With the use of code signing certificates, you can assure the users that the code is authentic and safe to use. Users do not get any warnings or errors while downloading the software that makes the whole process seamless.

3.     Validates the Authenticity of the Code

Any code or app first needs to be signed by the author before releasing to avoid any problems. A file signed with a code signing certificate confirms its authenticity to the users. Otherwise, users receive an “Unknown Publisher” warning on their systems that make them stay away from your software. Without a code signing certificate, you cannot validate the authenticity of your code and that’s really a big problem.

Many people find it hard to note the differences between these two certificates and some even say they are identical. This is not the case. Both these certificates have some things common like:

But both the code signing certificates and SSL certificates have very clear differences between them as follows: