Adam Curry, a radio jockey at MTV is known as the founder of Podcasting. He and his developer-friend Dave Winner started a podcast named “iPodder” back in 2004, and neither of them knew that they were sowing the seeds of an industry, which is currently valued at around $14.25 billion.

These stats are bound to grow, with experts aiming at around 144 million monthly podcast listeners in the coming years. That said, Podcasting is one of a kind industry as well, and it doesn’t have a direct competitor that can threaten its massive growth, unless you’re talking about, Vodcasting

After podcasting, which lets the users listen to audio files, comes vodcasting, which is the easiest way to bring video content to your screens. Theoretically speaking, Vodcast is a subsidiary of podcasting, and both of these have a rather similar process. However, with the massive surge in video content consumption over the last few years, thanks to platforms such as YouTube, Netflix, and Hulu, Vodcasting has created its own separate fan base.
Just to give you a reference, almost a third of us are spending at least $300 annually on video content. Here is a graph to depict that: Even some of the biggest names in the industry, like Joe Rogan, Howard Stern, and Carlos Mencia have jumped ship and shifted to Vodcasting. Considering all these factors, the debate between these two industries seems legit.

After all the recent resentment to its shiny new competitor, Podcasting has held its front fairly well. Yes, podcasting has some of its listeners transfer to vodcasting, but most of the loyal fanbase is still there.

As expected, the number of podcast listeners is still growing, especially due to millennial-focused platforms like Spotify, Soundcloud, and Apple Music supporting the cause for Podcasting. 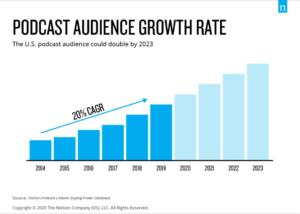 Most of the vodcasters we know started from old-school podcasting. Most of their viewers were firstly their listeners. So the dominant of the two is definitely Podcasting, not because it has been in the game for longer, but due to loyal listeners it has attracted over the period.

Well, the beauty is in the eye of the Beholder. Both Podcasting and Vodcasting had and are still bringing quality content to us, whether it’s inspirational, informational, or downright whacky! Choosing one between them is like choosing between Al Pacino and De Niro. Both of them bring something new to the table and both of them contribute what they are best at.

But just to give this debate a perspective, we’ve taken two metrics to judge which one is best for you. One from the eye of a viewer and the other one from a content creator’s perspective. We’ll bid these two against each based on these grounds and see which one’s tops the wishlist:

From a User Perspective:

If you’re a regular listener, just like most of us out there, then there are some pretty basic things that you need to consider between the two. First, it’s the quality of content, and Vodcasting has a clear edge in this.

As mentioned above, Vodcasting has earned its fair share of viewers thanks to the quality and variety of content it can deliver. On the other hand, Podcasts are much easier to listen and you can listen to a Podcast while on your way to your office while gyming or casually talking a walk in the park.

But number suggests that Audio content has somewhat peaked in recent years, with the number of users hitting an all-time high of 62 minutes per week. Here is a graph that suggests better Having said all of this, we have to say that if you are a viewer, Vodcasting is the one to consider just for the fair share of variety & engagement it offers.

From a Creator’s Perspective

Moving towards a content creator’s point of view now. So to start with, if you are an aspiring creator who is looking to make his through the industry, Podcasting is hands down your better option.

And there are three reasons behind that:

Although Vodcasting provides a much more varied profile to the creator, and Video content creators tend to be more creative. The hindrance of getting an early breakthrough can be tiresome for new recruits.

Podcasting has one more crucial thing going in its favour, and that’s the tools you can use as a creator. For example, Boomcaster was specifically created by a Podcaster considering things like user-friendly UI, recording in high quality and a custom experience overall. If you’re an aspiring Podcaster, you should definitely give it a try.

That said, this round clearly goes to Podcasting.

Moving forward from the parley, we know that both, Podcasting and podcasting have their own significance, whether that’s the audience that they both attract or the content that they deliver. Both of these industries will flourish side-by-side and be interdependent on each other.

So at the end of the day, it’s up to you which boat you want to ride?