It’s hard to imagine our today’s life without screen recording. There are plenty of situations where this function is necessary. People can record gaming sessions to show to friends, register a bug or an error in an app, or make how-to videos or short demos to demonstrate how something works.

The main way to record a screen video is to use a dedicated tool. It has many names: screen video capture software, screencap, screencast, or just screen recorder. Most platforms—macOS, iOS, Android, Windows, Linux—have their own built-in feature that can complete this task, in addition to tens and hundreds of third-party solutions.

It’s quite easy to get lost in everything the market offers. What is the best program to record a video game match? To record an educational presentation? How much should I pay for it? Is there a nice free screen video recorder to use for all these purposes? The below-mentioned solutions answer all these questions.

Open Broadcaster Software, or OBS Studio, is an open-source cross-platform screen recording tool. Being a free program, it has an advanced set of functions. With OBS, a user can use multiple sources for creating a scene and move around them without any bumps. Customizable shortcuts and simple transitions help with it a lot. Also, OBS can record both the whole screen and only the part chosen by a user.

However, OBS can seem too difficult to deal with, especially for newbies in video editing. This app has everything for making a long video with many dynamic elements and a lot of information. It’s not the most suitable tool if you want to record short videos. 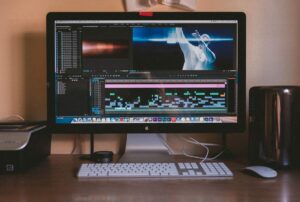 Movavi Screen Recorder is another solution that is definitely worth mentioning. It’s a well-designed user-oriented tool for screencasting. This application will fit you if you want to make short recordings quickly and without unnecessary actions. It allows users to save the video in multiple formats (including GIF), capture web camera footage, and record internal audio on Mac and PC.

Unlike OBS Studio, Movavi Screen Recorder is not completely free. The app offers a free trial with a 2 minutes limit for one-time recording and a watermark. It can be enough for some users, but if you want to continue working on a more professional level, you should choose one of three plans Movavi has to offer.

AZ Screen Recorder is the most popular screen recording app for Android. It looks like a small overlay button that allows you to record everything happening on your device’s screen in Full HD quality. Just like screencasting on a PC, you can easily record video game sessions or capture bugs in other apps. You can also turn on the front camera and record your reaction at the same time. For the cherry on top, the app includes a simple video editor so you can save only the necessary parts.

AZ Screen Recorder is available on Play Market for free. Most of the functions, including limitless recordings and count-down timer, come with the free plan, but the full version will cost you $2.99.

As we already mention, companies that create operational systems implement built-in screen recording features. Apple added this feature to their devices with iOS 11 and further. If we take a closer look at what screen video capture iPhone and iPad can provide, this feature is a breeze: You swipe down the control center, tap on the “screen record” button, swipe up, do whatever you were going to do, and at the end tap the same button again.

Since it’s a built-in iOS feature, it’s absolutely free. However, if you want to add text or images to the video or edit it in other ways, you will still need a third-party editor.

QuickTime was created by Apple for Macbooks and now is available by default in most macOS-based devices. It has an intuitive and user-friendly interface. In addition to screen video capture capabilities, this app is a great video player and video editor. There is no surprise QuickTime became a highly popular tool among Mac users.

Still, there are some points to take into account while using QuickTime. If you want to record audio from Mac itself, QuickTime won’t help you. It can only capture external sounds via a microphone. Also, the set of functions can seem insufficient for more advanced usage. Bandicam is a screen recording program that is mostly used by the gaming community for capturing video games. It provides screen video capture for Windows 10, 8, 7, and Vista. Gamers appreciate Bandicam for its ability to make small-size video files and keep their high quality at the same time. In general, it’s a universal tool that can be used for multiple purposes.

The free version of Bandicam puts a watermark on top of videos. Besides, each video will be no longer than 10 minutes. To unlock all features, you should acquire a paid version for $39.99.

Camtasia is one of the most sophisticated tools for screencasting. The app has been present on the market for quite a time, so a lot of users have already estimated its possibilities.

In addition to recording audio and video, Camtasia has substantial editing features. With a smooth click-and-drag interface and the ability to add interactive elements, it’s easy to create engaging tutorials and how-tos. One of the most prominent functions of Camtasia is adding captions to the video. The importance of captioning for video content is hard to underestimate, so this app wins a point here.

Camtasia has a free version, the paid one will cost you $249.

Summing it all up

The screen recording programs reviewed above are the most sufficient and universal tools on the market. Depending on your device, OS, and budget, you can choose the most suitable solution for your purpose, whether it’s starting a gameplay YouTube channel, making short tutorials, or recording online seminars.

If you want to look for more software for video editing, you can check out the best photo video makers with music for PC.