ReactJs is one of the leading JavaScript frameworks, and this has been known to everyone for a long time and is clear.  In the top of the most progressive and effective, we always see the same names among which React already lives. Once revolutionary, but now fast, lightweight and popular, ReactJs essentially has a bright future, just like the same 5 years ago and now.

Of course, no one can give accurate predictions regarding the future, but based on statistics, React is consistently good. 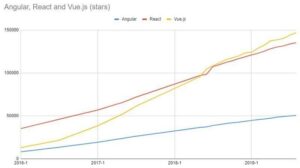 Why does everyone prefer ReactJs? Why did market geniuses such as instagram, facebook and also, for example, netflix, fall in love with him so much?  It’s not that hard to get to the truth. This framework is suitable for large-scale projects, while the head of developers will not boil from complex incomprehensible structures.

Of course, any innovations related to interface-related technologies, as they say, do not last long, but the situation with React is a little ambivalent.

It would seem, yes, ten years is already defined, this is not the age of a newcomer to the market, but just the same, React set trends and became a reliable and strong foundation, which also generates the same reliable library for developers. More than one generation of developers will use the data of this library.

If you are at a crossroads regarding React, we are in a hurry to dispel your doubts. ReactJS Development Services is already in absentia your faithful assistant!  This is the company you’ve been looking for.

So, continuing about the permanence and relevance of React.  You can immediately name a thousand seemingly important and inalienable technologies, but which now have no weight.  They are not relevant and outdated, maybe completely forgotten against the background of something more interesting.  But again, the duality of the situation with React is striking.  ReactJS is constantly in the process of being competitive and relevant.  And you know it’s a phenomenon. The real one. After all, their goals are justified.

In 2020, during the dawn of the pandemic and covid, our light in the darkness was the global version called React 17, which shook up the IT world and made a lot of discussions.

Speaking of React 17, the first thing I want to point out is the resolved version issue. That is, you can use several versions on one page at once. That is, when it comes to React 18, we will have two options. We will have a choice: to update everything at once or to do it partially. Very comfortably!

Since we mentioned React 18, I propose to develop this topic. For a long time the whole community held its breath.

Everyone predicted that version 18 would be released at the end of 2021, but the predictions did not come true.  And yet we are waiting for a new update in the first half of 2022, on which many hopes are placed, saying that React 17 is just the calm before the storm.

What awaits us in the future?

Updates change one by one, and the life of a developer becomes easier.  React is in a constant process of improvement and facilitation.  Although it would seem much easier?  But striving for the ideal is, on the contrary, a huge bonus of React.  For example, the problem in the form of a workflow with complex and problematic codebases also ceases to be such a bright obstacle. So a little about ReactJS and ReactNative.  ReactNative is a mobile app development tool and it has also undergone architectural changes, or to be more precise, improvements!  The goal is a more flexible and user-friendly framework for building applications.

Recent surveys, as mentioned at the beginning of the article, ReactJS is still popular and relevant to this day.  In the near future, you should definitely not even expect it to disappear. Great support prolongs life and inspires improvement. It’s happening before our very eyes!